Content Heads-up:  This post includes direct quotes about bodyweight and setpoint from Linda Bacon’s book, Health at Every Size. It also discusses how I am viewing some unintentional but not unwelcome weight loss.

As I mentioned in a previous post, I have been losing weight as a result of my Intuitive Eating practice. Once I began noticing my satiety signals, and feeling safe enough to trust myself not to restrict food based on them, I started noticing some weight loss. (By the way, Intuitive Eating is not a weight loss method. Weight loss is only one possible outcome out of three.)  Should I or shouldn’t I talk about it on this blog?

When I published that post, most people were supportive, yet a few made a point of letting me know that they thought I was “doing it [HAES] wrong.” Since many online groups that discuss HAES ban weight change talk completely, should I also do so for this blog?

More and more, I am thinking the answer to that is “No.” If weight isn’t a moral issue, why not write about it like I would any other change that is happening?

Lately, I observe that some of the people who discuss HAES online are far more closed off to weight changes (that happen as a result of practicing healthier habits, not dieting) than Linda Bacon’s book actually is. And that is their choice (and I think they have very good reasons for their choice! ), but let’s be clear, for anyone who has limited exposure to HAES:  nowhere in the book does Ms. Bacon say “since intentional weight loss doesn’t work for more than a small percentage of the population, you should try and stay fat (or thin, or medium sized) on purpose.” In fact, she says (on page 266, for example)

“If an individual’s weight is problematic from a health standpoint, the best way to address it is to improve health behaviors and let weight settle where it may.”

“Interesting….let weight settle where it MAY.” Not necessarily “where it IS.” She also acknowledges that an individual’s weight can be problematic from a health standpoint.

And yes, I am well aware of all the research that shows that long term weight loss is unlikely to be sustained in most people. But what am I supposed to do? Intentionally ignore my satiety cues now that I recognize them, so I don’t lose any more weight, because studies show it is highly likely I may gain it back? Somehow, I doubt Ms. Bacon or any reasonable person would advise that. In fact, throughout the book, she talks about being able to eat naturally in response to signals of hunger, fullness, and appetite as being a good thing.

One of the common myths I see floating around about HAES is it means that everyone is healthy at every size (I think part of that confusion has to do with confusing HAES with the Size Acceptance movement. They aren’t the same. There is some intersection and many people who practice one also practice the other. But they aren’t the same.).

Linda Bacon never says that everyone is “healthy at every size.” In this interview, she says

Q: What were some of the most common misconceptions about Health At Every Size that you encountered?

A: One misconception — that the term Health at Every Size means that everyone is healthy regardless of their weight. That’s not what the short sound bite is saying.

There are both fat and thin people who are struggling with diseases – and not everyone is at the weight that’s right for them.

In fact, on page 28 of her book, she has a list of questions to help you figure out if your weight might be above or below your body’s setpoint.  The very first question on the list titled “Are You Above Your Setpoint” is “Do you have difficulty recognizing when you are hungry and when you’ve had enough?” Yep. I did that. Until about 3 months ago, I couldn’t recognize my body’s “had enough” signal. (No shame in admitting that. It’s not a moral issue!).

The second question on that list is “Do you routinely eat beyond a comfortable level of fullness and feel lethargic, stuffed, or uncomfortable after meals?” Yep. I did that too. Because of the whole not-recognizing-my-satiety-signals thing mentioned above.

There are 8 more questions on the list. Which is then followed by a paragraph that says

“If you answered ‘yes’ to any of these questions, you are likely above your setpoint. Don’t feel bad. Most people aren’t at their setpoint. This book will help you find it.”

Yup, that’s right. The person who coined the term “Health at Every Size,” writes that “most people aren’t at their setpoint.” Meaning, that most people are either above or below the healthiest weight for them, as an individual. (She also does not make it a moral issue, which is where Size Acceptance and not being an asshole come in!)

Then there is this post on Go Kaleo, which expands a bit on the concept of a setpoint, and suggests a slightly different perspective: 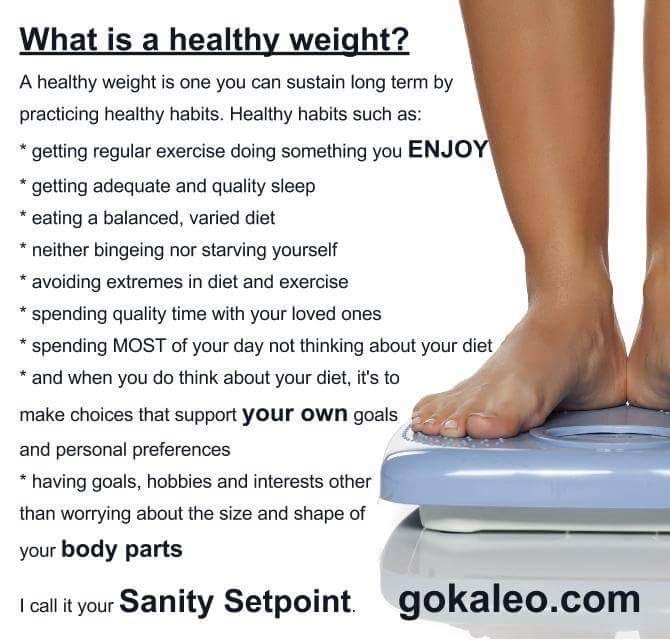 She asserts here with more strong wording that setpoint is behavior driven rather than biologically driven.  Yet, I don’t a ton of difference between this and what Linda Bacon says about setpoint. Semantics perhaps.

So here’s the thing: If weight setpoints do indeed exist, I have no idea of what my setpoint might be. For my entire adult life, until recently, I have been either:

So, I have no idea what my setpoint might be, but the fact that I am losing weight after…

….indicates that my setpoint is probably “somewhere lower than what I weigh now.”

How much lower? I don’t know, and like Ms. Bacon, I don’t think it’s worth worrying about.  But I think being able to write about it honestly without moral judgment and stress is an important thing to do, rather than pretending that weight changes don’t ever happen on HAES and aren’t okay to mention. Just because weight loss isn’t intentional doesn’t mean I shouldn’t notice or mention it if it happens.

Should I use weight change talk as a basis for moral superiority, moral obligation, or a barometer of worthiness? No.

Should I use it a means to shame people? No. Do something else instead.

Should I use it as a means to say things like “if I/she/he/they got a certain result, everyone else will/should/can too?” No. And No.

Should I use it to place myself on one side or the other of the “good fatty/bad fatty dichotomy?” No. I am with Ragen Chastain in that it needs to die and I want to help kill it.

Do I think individual groups online are within their rights to set rules about weight loss talk, because it can be a slippery slope and difficult to moderate? Absolutely! Their house, their rules (this blog, by the same token….) And of course, there is room for individual interpretation in any movement

But I still don’t think Linda Bacon would agree that the only people who “do HAES right” are staying the same size and never talking about other experiences. Yes, some people who practice HAES are fat and some proudly do Size Acceptance activism, but that is not the only way to “do it right. ” Some people experience weight changes as they settle into a more comfortable size for their body (whatever that means for the individual).  Some people find their weight settles after years of wild fluctuations. I don’t think there is any moral judgment in this statement: “For many reasons over many years, my weight may have settled above my natural setpoint….and now that some of those issues are resolving (and/or my habits are changing), my weight is adjusting accordingly.”

Based on Linda Bacon’s actual words, I have a really hard time believing that the creator of HAES would take issue with that.

You can follow via email (on the right side of the screen if you are viewing on a desktop, or closer to the bottom (after the comments) if you are mobile.

Power, Peace, and the Porch Gym

Power, Peace, and the Porch Gym

Chill the F*ck Out Fitness

Health at Every Size